Frederickson, the manufacturing boom town
Back to News

A manufacturing boom town in the heart of Pierce County

Things are booming in Pierce County’s Frederickson Industrial Center, one of the largest industrial development sites in the Puget Sound area. This major hub for manufacturing and distribution has seen an explosion in growth in recent years. It’s become a place where businesses come to thrive – and create thousands of jobs in the process.

The Frederickson Industrial Area has been years in the making, and it all started with speculation, faith and vision.

In 1968, the Port of Tacoma bought 500 acres in Frederickson for $1.6 million to provide a place outside of the Tacoma Tideflats for non-water-dependent industrial uses. Private land owners and developers followed. Today, the Frederickson Industrial Area covers 2,200 acres, and nearly half that area is still undeveloped. According to Rob Allen, Pierce County senior economic development specialist, in 2017 the Frederickson Industrial Area was home to around 4,500 jobs, and building space totaled about 7.3 million square feet.

“Economic development is a long-game,” said Economic Development Board for Tacoma-Pierce County President and CEO Bruce Kendall. “The Port of Tacoma’s gamble to establish Frederickson as a place of industry has paid off in a big way, with a vibrant and vigorous manufacturing sector providing family-wage jobs.”

Mike Avila, broker and principal for Pacific Rim Real Estate Group, has been involved with Frederickson as a developer and broker for two decades. He came on the scene in 1998 when James Hardie, a leader in fiber cement siding and a major Pierce County employer, set up shop in Frederickson. It’s no surprise, Avila said, that the area is such a draw. Flexible zoning eases the obstacles of getting up and running. And the region offers a quality skilled labor force within easy commuting distance. That’s just not the case in other industrial areas.

“The partnerships between the Port, Pierce County, the EDB and the private sector have been key,” Avila said. “And kudos to developers that have taken risks and provided the space for businesses to move in and grow.”

The latest big doings in the area illustrate how those partnerships and risks are paying off. In the southwest portion of the Frederickson Industrial Area, Best Buy is building a 400,000-square-foot warehouse on around 35 acres, and Logistics Property Company, a Chicago-headquartered logistics real estate platform, is making its first foray into real estate development in the region. LPC recently purchased a 210-acre site and plans to build a 2.5 million-square-foot industrial park called Frederickson One in three phases. The first phase is slated to open in spring 2020. Avila and the team at Pacific Rim Real Estate Group are listing agents for the new development, as well as many more Frederickson Industrial Area properties.

You’re likely familiar with Frederickson’s heavy hitters. It’s where The Boeing Company builds the tails for 787 jets and wing structures for its other airliners. Toray Composite Materials America, Inc. produces raw carbon fiber used in Boeing planes around the world at its Frederickson facility. But that’s just a slice of the neighborhood. Here are some other household names you might recognize:

Every one of these companies represents a successful EDB recruitment case.

Long-time Frederickson neighbor and Pierce County success story Carlson Paving Products has been a leading manufacturer of asphalt paving machinery for more than three decades. Carlson, An Astec Industries Company, is most noted for its industry-standout and award-winning asphalt screeds, critical components of the road-paving process that flatten and pre-compact asphalt. The company also produces class-leading commercial pavers and innovative attachments that enhance road and worker safety. Basically, they provide tools to contractors that make for successful paving jobs, from driveways to interstate highways.

Carlson’s operation began in a garage in downtown Tacoma. The company needed room to grow in the 1980s and set its sights on Frederickson. 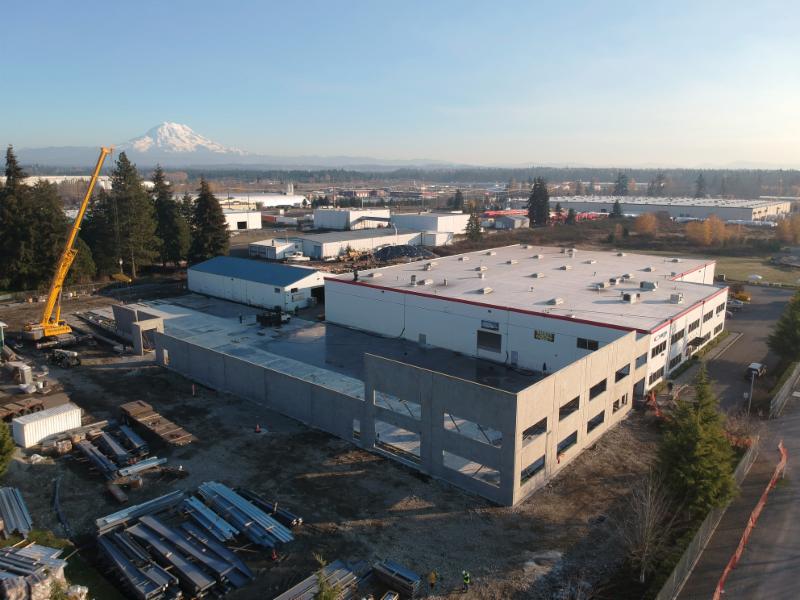 Carlson Paving’s state-of-the-art facility expansion will be completed in 2020.

“We needed to address our initial growth, and be able to grow and meet future demand,” said Travis Colwell, Carlson’s marketing and communications coordinator. “Frederickson allowed us to do that.” Carlson bought adjoining properties, opened a manufacturing plant on the site in 1999 and will complete a state-of-the-art 80,000 sq. ft. facility expansion in 2020.

Pierce County has been key to Carlson’s growth. County Executive Bruce Dammeier, then a Washington State legislator, took a strong interest in the company, recognizing its uniqueness and value. When it came time to expand, the County Executive’s office was instrumental in moving the project along. “Pierce County had faith in what we were doing and knew what role we would play in the growth in Frederickson,” Colwell said. “Our expansion meant more family wage jobs and more people employed locally.”

Carlson’s big push now is to enter the international market. As that happens, the company will continue to build their products in Frederickson. They’re in it for the long run, Colwell said, noting Frederickson’s proximity to the Port for exports and access to a great pool of talent for welders and assemblers.

The company has seen a lot of changes in the neighborhood since Carlson moved in. “There are so many manufacturers out here, and they are all growing, expanding and sending their products around the world. These small- and medium-sized companies are the backbone of our manufacturing economy.”

When Herb Simon, co-founding partner of Simon Johnson, LLC and EDB board member, began considering development of a retail center at the intersection of 176th and Canyon Road, the need for additional services in Frederickson quickly became obvious. The junction is the second-most-traveled intersection in Pierce County. Existing nearby retail space was at capacity and 1,000 apartments within an eighth of a mile from the location were newly completed or under construction.

“There’s nothing but growth out there,” Simon said. “That translates to lots of jobs and the need for more retail options to serve the growing area.” Today, about 55 percent of the Frederickson Place lots are sold. Among the tenants are AutoZone, Carl’s Jr., Taco Bell and a gas station and market owned by the Nisqually Indian Tribe. Simon said all the businesses are way beyond their projections. There’s more to come. A 10,000-square-foot retail center is 45 percent preleased, and the popular restaurant Hops and Drops (formerly Hop Jacks) is slated to open there in 2019.

“People really enjoy living and working in the area,” Simon said. “And now, services are there for them and they’re growing by the day.” Retail in the area is changing the intersection into a neighborhood destination, he said, and providing a transition between housing and the industrial area.

Pierce County has made significant investment in the area’s infrastructure and plans to continue that investment into the future. After funding enhancements to the Canyon Road corridor to improve freight access for Frederickson, Pierce County is now working to improve the road north of SR-512 and connect it to Fife and the Port of Tacoma. Other improvements in the area will make streets safer, brighter and more accessible to street and foot traffic alike.

There’s a lot going on in Frederickson, and there’s plenty of room for more companies to make their mark. If you’d like more information about what’s happening and what’s available, contact Sarah Bonds, EDB VP of business recruitment, or Maddie Merton, EDB VP of business retention and expansion.